A look at the great heavyweight champions 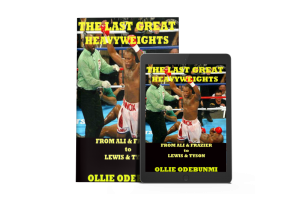 There is a truism in boxing: “As the heavyweights go, so does boxing.” Starting with the historical clash between Muhammad Ali and Joe Frazier in 1971, and culminating with the much anticipated fight between Lennox Lewis and Mike Tyson in 2002, this book looks at the great heavyweight champions who were the standard bearers of boxing over a thirty-year period.

From the steamy night-heat of Zaire in Africa, to the stiffling heat of Manila in the Phillipines, the early morning wet-cold of Cardiff, Wales, and celebrity-studded ringsides at the casinos of the sin-city of Las Vegas.
Grab a ringside seat and relive the epic fights and stories behind the rivalries as
boxing’s legendary heavyweight champions; Muhammad Ali, Joe Frazier, George Foreman, Larry Holmes, Mike Tyson, Evander Holyfield, Lennox Lewis and Riddick Bowe battle for the richest prize in sport.

Ham hock-like fists, punching with almost two tons of pressure on one square- inch of surface impact with shattering force. Blood, spittle and sweat spray the air.
Only the strongest of will, courage and chin survive.
In the end, there is one man left standing. The last great heavyweight champion.

This website uses cookies to improve your experience while you navigate through the website. Out of these, the cookies that are categorized as necessary are stored on your browser as they are essential for the working of basic functionalities of the website. We also use third-party cookies that help us analyze and understand how you use this website. These cookies will be stored in your browser only with your consent. You also have the option to opt-out of these cookies. But opting out of some of these cookies may affect your browsing experience.
Necessary Always Enabled

Any cookies that may not be particularly necessary for the website to function and is used specifically to collect user personal data via analytics, ads, other embedded contents are termed as non-necessary cookies. It is mandatory to procure user consent prior to running these cookies on your website.