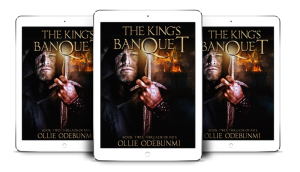 A wise man would grasp a king’s largesse with both hands when offered, for the next day he might demand your head on a whim.

Soul eaters stalk the land, leaving a trail of despair and desolation with none safe from the abominations. With his armies and best warriors slaughtered, their souls drank like fine wine, the king in desperation seeks the counsel of Castillan, the greatest sorcerer of the age.

When Belash loses his wife and son to the abominations, his life spirals into despair, drunkenness and wanton violence. Seeking a measure of revenge, he takes up his father’s old axe and journeys to the capital to join the select band put together by Castillan to stand against the soul eaters.

The demons are vanquished, with Belash and his companions lauded as heroes. A banquet is held in their honour, but none could have foreseen the cataclysmic events at night’s close.

The King’s Banquet is the novella prequel to Verge of Darkness, the first book of the Threads of Fate series.