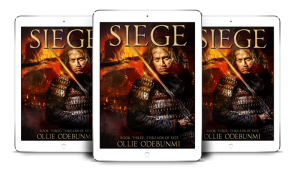 Before all’s done, many thousands will die, carrion birds will glut their fill, dark magics will be unleashed, and a young man will stare into the eyes of madness.

The Eastern kingdom of Chenghuan is riven by internecine strife, and a hatred of foreigners as a mighty army gathers on its southern border. A young man on a journey of self-discovery far from his own land is thrust into the turmoil. He will either be forged into the finest tempered steel in the maelstrom or shattered into a thousand pieces.

Aeneas bears the name of a great warrior from a different world. One, an unimaginable distance away beyond the stars, or perhaps only a few heartbeats if reached through a portal between worlds. Thrust into events beyond his understanding, malice and sudden violent death hovering like dark shadows, he will need deep wells of courage to survive.

Toshi and Yuudai, two young warriors determined to fulfil the destiny of their downtrodden people, the Kovari, lead an army of over 250,000 savage tribesmen across the vast Kovra-Sa desert to lay siege to the mightiest fortress of the age. Two heroes thought dead, join a traumatized father in a desperate search for his son in a far-off land at war. All the while, the malevolent shaman, Nogunata plots his dark designs seeking to prolong his unnaturally long lifespan. But even he with his vast sorcerous powers, is unaware he is being manipulated by Tusog the blood god of the Kovari. A dark entity who derives his power from worship and death and seeks to return to the flesh and drown the world in blood.

Siege is the sequel to Verge of Darkness